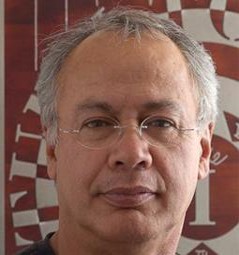 Primarily a sculptor, Robert Jahnke is considered one of New Zealand’s leading contemporary Māori artists. He works with a range of media including found objects, steel and lead. Of Samoan-German-Irish-Maori heritage, his work is typically based on political issues that face Māori people, the relationship between Māori and European colonisers and the impact of Christianity on Māori culture.

Robert Jahnke was raised at Waipiro Bay on the East Coast.

He went on to receive a Bachelor of Arts and a Master of Fine Arts from Elam School of Fine Arts, and a Masters in Experimental Animation from California Institute of the Arts. In 2006, Jahnke was awarded a Doctor of Māori Studies from Massey University.